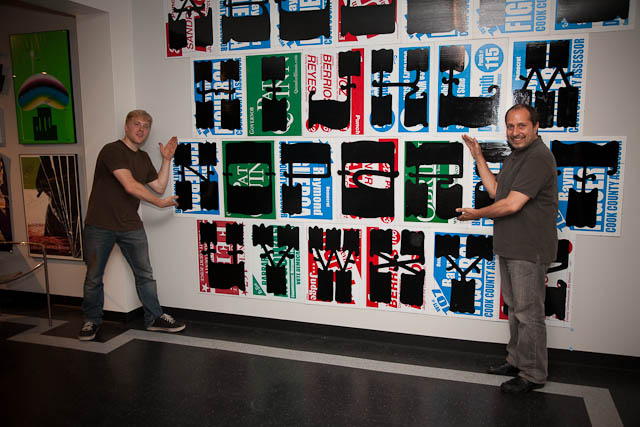 Local designer/street artist/activist, Nick Adam has permanently installed his painted alphabet Rare Form first shown in the Typeforce show inside the Thirst studios. You are invited and encouraged to stop by and see Nick’s work up close as it is a rare and intelligent typographic gem. Drop us and email or call first to let us know you are coming by in the months approaching the mid-term elections.

Here’s  a sample from Nick’s description of Rare Form

… Rare Form’s objective was to offer moments of visual silence while celebrating the power and the beauty of typography. In an act of info-reduction, signage from Illinois’s 2010 primaries was removed from public spaces to be repurposed as canvases. Violating the one-color graphics with hand lettered type substituted the multiple messages once held by the sign for a much simpler one. The slab-serif letters are a custom alphabet created for this project. Each was freestyled following the hand techniques of traditional sign-painters as well in their medium of brush and 1-shot enamel.

Displayed individually as well in groupings, we are privy to observe each character outside of its common codependent context of conveying a message. Sans-statement, these letters will not judge your lifestyle, ask you for help, nor will they tell you where to be. Simply these symbols exemplify the power and capabilities of our human kind.