In 1974, Paul Rand designed Columbus Indiana: A Look at Architecture. This book showcased the city’s modernist architecture. The cover featured a playful motif referred to as the “Dancing Cs,” and with Rand’s permission, Columbus adopted the dancing Cs as its graphic identity.

In 2017, the Columbus Area Visitor’s Center leadership initiated a project to connect four neighborhoods with design. The goal was to develop neighborhood graphics that allowed for visible connections throughout the city by giving form to the unique personalities of each neighborhood.

Rick Valicenti and Bud Rodecker led the research and design process in collaboration with Greater Good Studio. Our process began with community engagement presentations and interviews, as we believe that Columbus residents know their city’s design legacy best. Many vibrant exchanges revealed that the community had a keen awareness of design. This creative process was richly rewarded with inspiration from Columbus residents.

Our design process put forth the hypothesis that graphic design, like architecture, needs to be maintained.

Paul Rand's "Dancing Cs" can be found around Columbus on original signage.

Paul Rand's own work with Cummins demonstrates the unlimited potential for variation within a graphic system. These annual report covers gave us inspiration for how to create new treatments that represented each neighborhood uniquely.

We digitized and redrew Paul Rand's C on a grid to allow for future repetition and patterning.

Paul Rand was a masterful, intuitive designer. In order to develop a sustainable system that any designer can follow, we knew it was important to provide replicable logic.

Paul Rand wasn't the only designer working in Columbus at the time. Alexander Girard was instrumental in developing the main street master plan and designed the interiors to the famous Miller House. Charles and Ray Eames were ever present with their furniture. To create more variety, we introduced iconography to the pattern inspired by Girard and Eames.

We developed a unique pattern for each of the four neighborhoods: Downtown Columbus, the Arts and Entertainment District

To honor Rand's original type spec, the identity uses Neue Haas Grotesk, which closely matches the version of Helvetica that Rand may have used at the time.

Visitors downtown are greeted by welcoming messages in some of the languages spoken by the community.

Silver buses are dipped in Cs.

The C will be extruded to create illuminated bollards.

The hang about C. Photo by Hadley Fruits.

Edge defining treatments at the AirPark.

Our research included a visual audit of the logos already found in Columbus. The results led to the design decision that the neighborhood graphics would have a language of patterns, instead of another singular "C" logo.

Surveying the community revealed that the "Dancing Cs" were primarily seen as exciting, fresh, reliable, and trustworthy–excellent adjectives when developing the neighborhood graphics for representing each individual area. The municipal logo of the Columbus "C" in the box continued to function as the official seal of the city.

We asked key stakeholders from each neighborhood to respond to simple graphic prompts: Select a color palette, a typeface, a graphic pattern, draw flags, write key words about your neighborhood, and write a positive goal for this project.

Participants were each asked to write down a positive goal for the neighborhood brand project. They could all be summarized into these four basic goals. Positive goals reframe a design problem into an opportunity.

The creative prompts asked participants to draw a flag that represented their respective neighborhood. 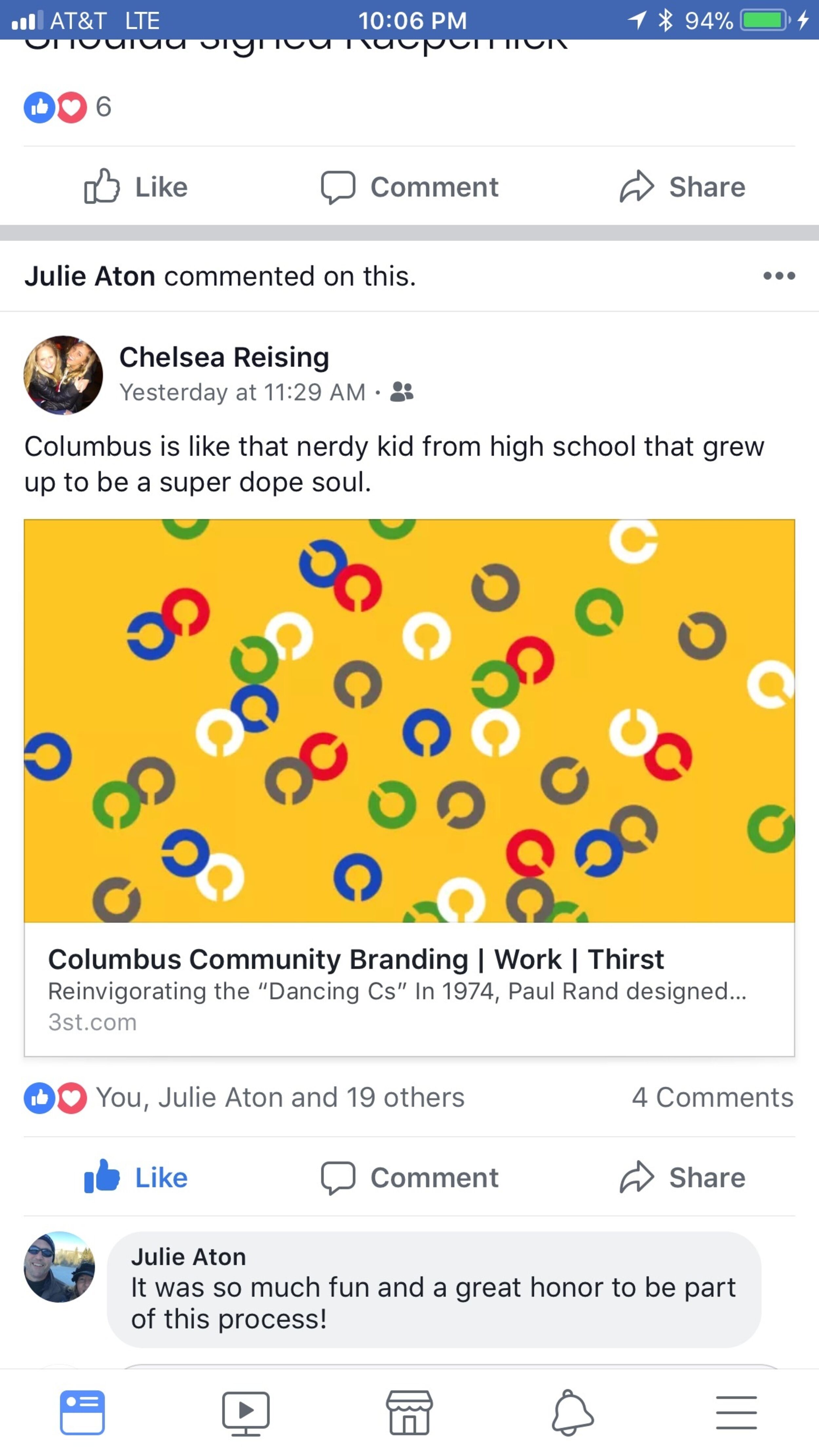